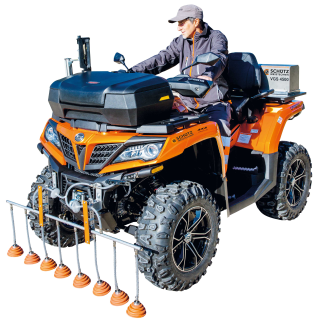 Thanks to the highly sensitive measuring cell and the high-performance overall package, you are able to control traversable line systems at speeds of up to 50 km / h.

The gas concentrations found (suspect points) and all data required for documenting the inspection are automatically saved and can be easily evaluated and analyzed using the software specially developed for the VGS 4500. The gas detector only has to go into the areas in which the VGS 4500 has detected increased methane (CH4) concentrations or which could not be driven over

The measuring unit can be mounted on many different types of vehicle (pick-up, quad, car, ...) and can be entered into the required platform for every application or environment. The navigation is carried out using the supplied tablet PC, which means that the driver can always keep track of the route to be traveled. The line network is uploaded to the tablet PC in advance of the inspection and serves as a navigation aid.

The daily routine of inspecting the gas pipe network is complemented very well by this procedure and its efficiency is increased enormously. The physical strain caused by long walks is significantly reduced. Idle times or transfer times to the next inspection section are reduced. The VGS 4500 can cover a lot of the gas pipe network inspection especially in difficult terrain, inclines, forest and field paths, meadows and fields. This means that he is able to control larger pipe sections per day. By using a small, agile and all-terrain vehicle (e.g. quad), there are few limits to the usability of the measuring system.

The “Scout VGS 4500” has proven its reliability even under the most difficult conditions. For the end customer, the system was successfully subjected to an endurance test in the desert at an outside temperature of over 36 degrees.