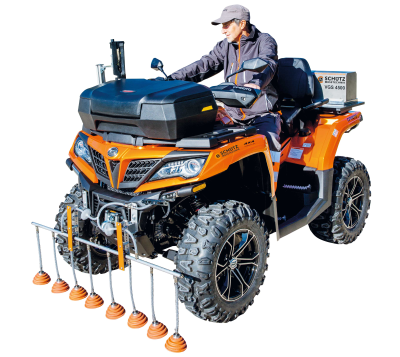 The "Scout VGS 4500" can be used modularly with different vehicle types and is easy to operate. In the Peruvian desert, it has already proven its reliability and its enormous practicality under the most difficult environmental conditions.

The above-ground inspection of the gas pipe network was previously carried out on foot using a carpet probe and measuring device, with which the underground pipes are checked. The vehicle-based measuring station "Scout VGS 4500" enables you to meet the requirements of the new set of rules on the go and much faster than before. It improves the known sensitivity many times over, thus significantly increasing the quality of the vehicle-based gas leak detection. Together with the specially developed system software, the documentation quality of the operation increases immensely

The new "Scout VGS 4500" measuring station consists of several measuring probes mounted in front of the vehicle and can be attached to the front of different vehicles, such as pickups, quads or cars. The measuring cell is installed inside the vehicle and is connected to the probes via a suction hose. Any necessary adjustment of the probe distance to the ground surface can be done quickly in a few simple steps, and stowing the entire front probe is very easy.

G465-1: Paragraph 7.2.1
Vehicle-based measuring systems for above-ground checking of gas pipes for leaks can be used above the pipe run. 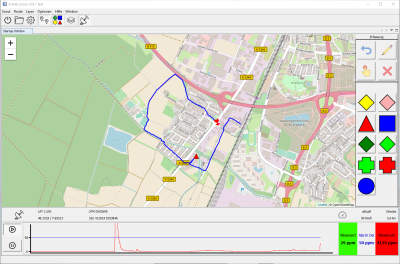 An innovative laser measuring system is used for methane gas detection, which enables a very high sampling rate and an equally high measuring sensitivity of 0.01 ppm. Because the laser is set to methane (CH4), there is no cross-sensitivity to other gases such as car exhaust, LPG or other hydrocarbon gases.

The "Scout VGS 4500" measuring unit is operated and monitored with a tablet PC. The software for this was developed and programmed specifically for the system by Schütz GmbH Messtechnik. It shows the traveled measurement route in real time, automatically records and logs every leak.

A global overview map (OSM) is already included in the scope of delivery. Furthermore, a map of the gas pipe network to be checked can be read. This makes it easier for the driver to drive on the corresponding route using GPS without the need for a pilot.

G 465-4: Appendix B
Automatic necessary recording of position, speed and measured value. Observe the speed of inspection as well as wind and wind direction. Ensure detection over the entire width of the vehicle.

With the "Scout VGS 4500" measuring system, very large network sections can be checked in a short time and the results can be documented. Measurements from practice have shown that speeds of up to 50 km / h are possible with the vehicle-supported measurement system. The “Scout VGS 4500” has proven its reliability even under the most difficult conditions. For the end customer, the system was successfully subjected to an endurance test in the desert at an outside temperature of over 36 degrees.

The "Scout VGS 4500" measuring station was designed to be easy to install and to operate. Operation is possible after a very short briefing of the emergency personnel. After all, during development it was already taken into account that the “Scout VGS 4500” can be mounted on a large number of different vehicles, which is why the compact design enables easy assembly and disassembly of the measuring cell.

Using the software supplied, the routes can be created, documented and additional information entered. With the continuous evaluation of the measured concentration "plot" and marking in the map, the location of the leakage can also be determined subsequently without further ado. The data can be transferred from the tablet PC to the office workstation; the license for this is included in the scope of delivery. 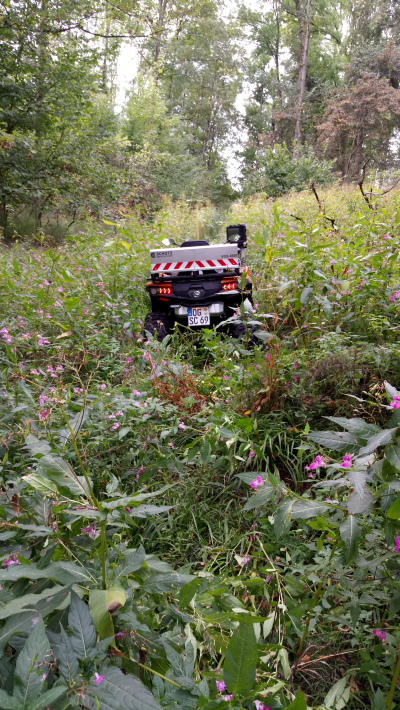