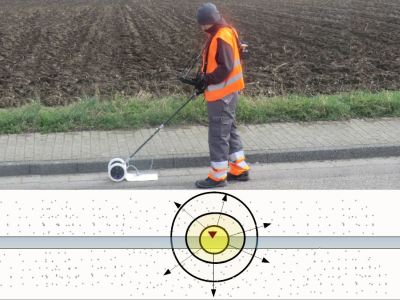 Practice shows time and again that leaks occur in new underground pipes that are not yet in operation and in existing pipe systems.

The available leak location methods such as correlation and eavesdropping can often only be used under very specific conditions. They reach their limits, especially with small leaks or low pressures. For example, with empty new lines (pressure test is not available) such as in a house installation.

The use of tracer gas offers the possibility of pinpointing the smallest leaks even under adverse conditions. This is often the only way to locate the leak successfully and with little effort. Under certain circumstances, even without interrupting production at industrial companies. At the same time, the damage is caused by excavation or the like relatively low.

The tracer gas is highly volatile and uses all of the cavities, which is why the tracer gas is often found to migrate; the above-ground inspection must therefore be verified. This is done by measuring the soil air using a soil probe (see above). In the case of gas and water pipes without a protective pipe, the migration of gas is low and the success rate is high.

In the case of, for example, covered heat pipes, however, the migration of the gas is significantly stronger due to the heat-insulating cover and the leak detection is usually a lot more complex. The exit from the casing is usually not the location of the leak (see diagram on the right). This is similar in the building, due to the existing gas-impermeable separating layers in the floor and wall structure, the tracer gas often migrates far away and the leakage point is not at the outlet point of the carrier gas. In both cases, it is advisable to use additional technology, such as infrared cameras. 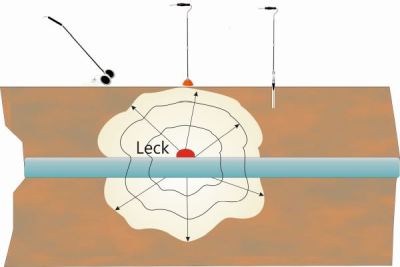 The tracer gas (e.g. a mixture of 95% N2 and 5% H2) is poured into the entire pipeline. The pressure used and the amount of gas used depend on the problem. The pressure with which the gas is introduced must be at least as high as the lowest pressure at which a leak is suspected during operation. During the leak search, the gas is replenished in order to maintain the pressure.

Diffusion through the soil takes a certain amount of time, so depending on the cover and the nature of the soil, sufficient time should be planned. In general, one can assume that the gas spreads relatively homogeneously in the soil. Of course, always depending on environmental influences such as rain, solar radiation, frost and so on.

The same procedure is to be used as for the above-ground inspection of underground gas pipes, see G 465-1. First, the surface is sampled with the carpet or bell probe. The suspect points found with this procedure must then be narrowed down more precisely. Here holes are driven into the ground with the help of hammer drills or rotary hammers. Then the leakage point is narrowed down with a suitable H2 measuring device (e.g. contactor GM 5) and appropriate borehole probes. One can assume the leakage where the measured concentration is highest.

Dissolved helium as another option for tracer gas

Helium is fed into the pipe system with water without bubbles (e.g. for district heating) and transported by the water. At the leakage points, water containing helium escapes into the ground or the sewer system. The helium becomes gaseous again, penetrates the soil and can be measured on the surface.

The sensors must be suitable for the respective tracer gas and be able to measure it even in small concentrations. The G465-4 set of rules can be used as a limit for the sensors. It must be ensured that the sensor system used can detect 10ppm of the tracer gas with the probe system.

Helium can also be used for special applications; this is a popular tracer gas, especially in industry, to check the tightness of lines with toxic contents. The even smaller molecule and the sensitive sensors (helium 1 * 10-9, hydrogen 1 * 10-6) enable even smaller leaks to be detected. The use of helium is therefore frequent, particularly with toxic gases.

Since the technical tightness in the area of ​​gas and water pipes is different from that of poisonous gases, the properties of hydrogen and the associated sensor systems are sufficient! The costs incurred are important in this context, since the helium gas and also the helium sensor technology are significantly more expensive than hydrogen technology.
Device technology

The devices and probes used must be suitable for the tracer gas. In particular, it must be possible to use the carpet probe, as well as to measure the air in the soil, i.e. up to 100% of the gas used to limit the leakage point. For this purpose, we can offer you our GM 5.

Areas of applications for tracer gas

The process cannot be used or can only be used to a limited extent for: