All local networks, including the sub-networks supplied with propane / butane mixtures, must be checked regularly in accordance with the DVGW regulations (G465 ff). The gas supply companies operate local networks with propane / butane mixtures in areas which at the time of construction have no natural gas connection or which can only be established with a great deal of effort.

Since the heavy gas network cannot be checked with the above-ground inspection due to the non-rising gas, the entire network was drilled for a long time and the concentration was measured in the boreholes. The probe hole method is not particularly advantageous in new building areas.

We offer you an alternative. This time-consuming method is no longer necessary with the addition of hydrogen. The underground LPG pipelines can be checked without having to dig a large number of probe holes or even having to take the entire system out of operation. In any case, testing the soil air with liquid gas is very questionable due to the high density ratio to air.

As with the inspection of leaky new gas systems with forming gas, underground liquid gas lines can be inspected. The difference is that approx. 5 vol% hydrogen is added to the liquid gas. By feeding hydrogen into the heavy gas network, the above-ground inspection according to G465-1 can be used again. The soil air test is only used if a leak is found during the above-ground test. 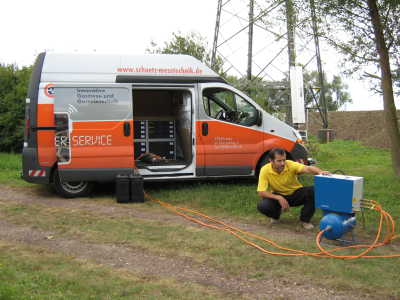 The heavy gas network is checked by measuring the hydrogen concentration on the surface through an above-ground check with the carpet probe and, for example, the GM 5 gas detector from Schütz Messtechnik. The prerequisite is the permanent supply of hydrogen (H2).

Before starting the inspection work, we measure the hydrogen concentration at the most distant point with our portable gas chromatograph PGC and create a protocol for it.

The hydrogen that is mixed in at times, in a precisely defined proportion, does not interfere with the operation of the gas consumption systems. The liquefied gas / hydrogen mixture flowing out of a leak is distributed at the outflow point in such a way that the very light hydrogen with portions of liquefied gas comes to the surface of the earth and can be detected very well above ground with a hydrogen-sensitive semiconductor.

The time it takes to complete the verification using this method may be less than in the past. The implementation requires special attention.

If it is not possible to feed in hydrogen (lines with production gases), our team of gas detectors is also able to control the heavy gas network with conventional borehole probe technology.

Here, small holes are driven into the ground above the pipe using piston probes or rotary hammers and a possible gas concentration in the subsurface is checked with the borehole probe, for example the GM 3100 gas detector from Schütz Messtechnik.

Open gas pipelines on factory premises (according to G 614)

The gas lines are generally checked without interrupting operations. Checking cycles according to the number of leaks, see G614-2